Due to climate change, extreme weather events like heavy flooding or droughts are becoming increasingly more frequent. Poor and vulnerable people and countries need to get better protection against these climate-related risks. They are calling on the industrialised countries for support. The G7 countries have therefore agreed with the V20 countries to set up a Global Shield against Climate Risks. The Global Shield was officially launched on 14 November 2022 at the COP27 climate conference.

Climate-related disasters have devastating impacts on poor people in particular. They often do not have the means to protect themselves and their homes, fields or businesses against extreme weather and can lose their entire possessions when a disaster strikes.

The countries of the Global South are the ones worst affected by the consequences of climate change and they often do not have the resources needed to protect their citizens from them. “Loss and Damage” is one of the topics being discussed in international climate negotiations. The topic is tied up with the responsibility of the industrialised countries for causing climate change and with the associated question of climate justice.

Germany is very engaged in (further) developing support programmes for dealing with climate-related damages, with a view to providing protection against climate risks for as many poor and vulnerable people as possible. It is against this background that, under Germany’s G7 Presidency in 2022, the G7 has recognised that vulnerable developing countries need more support for dealing with climate-related damage.

During its G7 Presidency, Germany launched the development of a “Global Shield against Climate Risks”, which was unanimously supported by the G7. The shield will bundle activities in the field of climate risk insurance and prevention in close cooperation with the V20 (an association of states that are particularly threatened by climate change).

The Shield gathers activities in the field of climate risk finance and preparedness together under one roof. Under the Shield, solutions to provide protection will be devised that can be implemented swiftly if climate-related damages occur. This process is linked to contingency plans of developing countries. As a result, people and authorities will be able to access the assistance that they urgently need when disaster strikes more easily and more quickly. Furthermore, the Shield will mobilise additional funds in order to meet the growing demand for finance.

At COP27, Chancellor Olaf Scholz announced Germany's contribution of 170 million euros to the shield. Of this, 84 million euros are earmarked for the central financing structure of the shield, the other funds for complementary instruments of climate risk financing, which will be implemented in concrete safeguarding measures over the next few years. The funds come from the BMZ budget.

Together with Denmark, Germany is thus one of the first supporters of the new protection umbrella, which was officially launched by the G7 and V20 on 14 November 2022.

Various instruments are available that can be used to help disburse money quickly to governments and to poor people and those worst affected when a disaster occurs. They include, for example, social protection systems, designated disaster reserves in public budgets, loans from multilateral development banks that are disbursed in an emergency, or government bonds for which repayment can be reduced or suspended in a disaster situation. Insurance against rare events with the potential to cause a huge amount of damage can also be a useful instrument.

The basis is provided by contingency plans that a country draws up after analysing its own climate risks. Where are the biggest risks? What efficient protection and preparedness systems are needed to mitigate these risks?

Governments can use these preparedness mechanisms after climate-related damages have occurred to quickly restore the foundations for economic and social activities for the population. This fast response is very important because, if poor and particularly vulnerable people do not get quick support when a disaster strikes, there can be long-term consequences. They may be forced to use the savings that they have put to one side for investments to buy food instead. Or they may have to sell their tractor instead of using it to replant their fields. The children of these families are often not able to stay in school, because their parents are no longer able to pay the school fees or because they must work in order to contribute to the household income.

The Global Shield against Climate Risks will help to reduce the follow-on costs of disasters, accelerate economic recovery and avert the danger of people sliding into poverty.

Pakistan regularly experiences extreme weather events with negative consequences for the population, especially in agriculture. With support from the InsuResilience Investment Fund (IIF), a local foundation in Pakistan offers farmers a chance to combine micro loans for livestock purchases with micro insurance.

The increase in extreme weather events such as floods has been presenting a major challenge to Peru. Public infrastructure is particularly important in this context. The InsuResilience Solutions Fund addresses this by supporting an insurance programme for public schools.

A joint G7 and V20 ambition: Working towards a Global Shield against Climate Risks 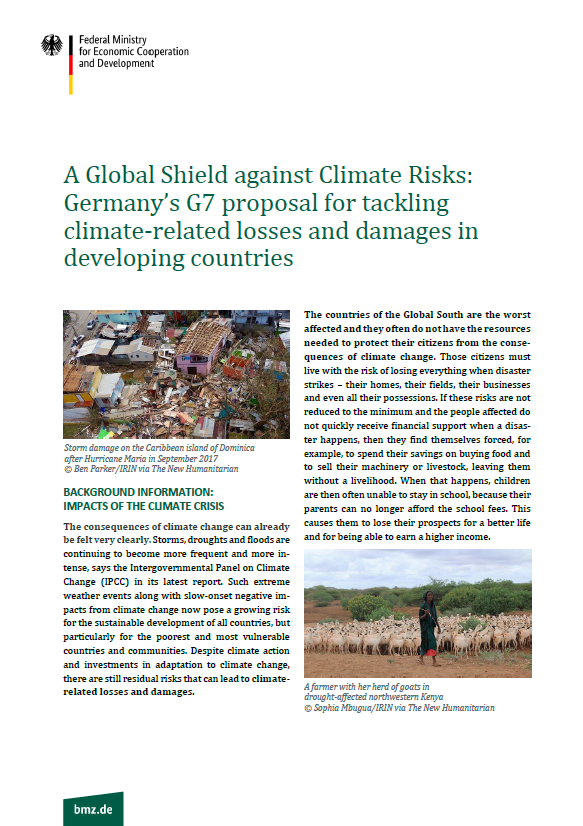