Worldwide, there are more than 100 million displaced people (source: UNHCR (External link), May 2022). They all were forced by war and violence or human rights violations or political, ethnic or religious persecution to flee their homes and face the risk of heading into the unknown.

And there is no end in sight to this dramatic situation. Worldwide, millions of children and adults are in the midst of a humanitarian disaster.

The civil war in Syria continues. Throughout the region, there are hundreds of thousands of displaced people who have fled from the fighting and from political repression. And there are further countries where conflict has caused an increase in the number of refugees and internally displaced people over the last few years, for example Ethiopia, Afghanistan, Yemen, and countries in the Sahel region.

Supporting displaced people and their host countries is a matter of top priority in Germany's development policy. In 2020 alone, the German Development Ministry (BMZ) provided some 5.5 billion euros to address the causes of displacement and irregular migration, assist displaced people, stabilise host regions and support the reintegration of returnees in their home regions.

In severe emergency and crisis situations, the humanitarian assistance provided by the international community is a measure that ensures the survival of displaced people. Within the German government, the Federal Foreign Office is responsible for this type of emergency relief.

The task and mission of the BMZ is to assist people in developing countries in their efforts to live their lives in dignity and to build a future for themselves and for their children. The Ministry pursues a broad range of activities in order to work towards that goal.

Addressing the causes of displacement and irregular migration Internal link

Germany is helping countries in crisis to stabilise their political and economic situation and rebuild institutions that have been destroyed. It also helps partner countries to pursue conflict prevention policies that take account of the national situation, local culture and potential sources of conflict, and to foster economic development so as to give people the prospect of a viable future in their home countries, with a view to preventing displacement from happening in the first place.

The majority of refugees find shelter in neighbouring countries. However, the infrastructure of these countries is often not very robust. In order to ensure that refugees have access to basic services in their host countries, and to simultaneously help stabilise these countries, Germany is investing in developing local infrastructure, among other things.

Often, refugees and internally displaced persons have no choice but to stay in their host communities for many years. The situation they have left behind only improves very slowly, if it improves at all. Through its development cooperation, Germany seeks to give both refugees and internally displaced people in host countries as well as returnees in countries of origin a basis for building a future for themselves.

War and conflict are among the main drivers of displacement. Thus, preventing violence from erupting in the first place is an important objective of German and international development policy for peace. For such crisis prevention to be successful, actors need to change the causes and factors in the general environment that may lead to conflict in the countries concerned. Simultaneously, it is important to increase peaceful conflict resolution capacity. The BMZ provides more than two billion euros a year to support projects geared towards building peace, preventing crises and resolving conflicts.

The German Development Ministry not only seeks to reduce the dangers of irregular migration, it also works towards using the potential offered by regular migration for the benefit of development. In these efforts, it works together closely with other policy fields, such as foreign policy, domestic policy, labour market policy and education policy. The BMZ also plays an active role in defining migration policies at the EU level. From a development point of view, it is important to give direction to migration in such a way that positive effects (a triple-win situation) are achieved for all those involved – host countries, countries of origin and the migrants themselves.

In 2020, the BMZ provided about 5.5 billion euros to tackle the root causes of displacement and to support refugees, internally displaced persons and host communities.

A large proportion of this amount was used for traditional bilateral, multilateral and non-governmental development cooperation.

However, transitional development assistance, which involves efforts to strengthen the resilience of people and of societies in countries affected by short-term or protracted crises, is another important instrument which the BMZ uses in the field of displacement and migration.

And in the years since 2014, the BMZ has created special initiatives to complement its traditional development cooperation.

The Ministry has launched a number of programmes to give people in crisis regions and host countries a better future.

The BMZ uses this Special Initiative to respond specifically to the challenges arising from global refugee movements. Between 2014 and 2021, a total of 299 projects were implemented under the Initiative, reaching about 17.5 million people.

In its work, the BMZ puts an emphasis on increased dialogue with host countries about protecting and integrating refugees and meeting their basic needs. The aim is to enable the people affected by displacement to live their lives in security and dignity whilst also supporting the people in the respective host communities. The Initiative also provides targeted support to internally displaced persons in a way that is tailored to their specific situation and the challenges they face.

This involves a broad range of activities that address, among other things, areas like education, employment, health, social protection and psychosocial support. Measures relating to the fields of energy and climate are increasingly being promoted, for instance projects on reforestation, on erosion control, or advising governments on how to support people displaced within their own countries due to climate change. Local civil society organisations and municipalities are involved in planning and implementing the measures.

One focus of the Initiative is on empowering women. So far, for example, cash-for-work measures have been implemented that have helped to achieve very high employment rates among women. The Initiative’s gender-transformative impacts are to be strengthened further as it is going to increasingly address gender-relevant power structures and processes, for instance by including women more in political processes or improving their legal situation in their own countries.

Special initiative “Stability and development in the MENA region”

Through this Initiative, the BMZ has been responding to the political transformation in the region, supporting activities that help to foster economic development, create new and better jobs, promote democracy, and stabilise the humanitarian situation in crisis regions.

In 11 countries in North Africa and the Middle East, the Initiative is helping to improve young people's opportunities in the job market. Examples of results achieved through the Initiative include the participation of citizens in political decision-making and better access for people in crisis regions to food, drinking water and health care.

The focus of this Initiative is on the aforementioned transformation and on increasing resilience against food crises, sustainably protecting natural resources and fostering gender equality.

More information can be found here.

The Federal Ministry for Economic Cooperation and Development (BMZ) launched the Special Initiative “Decent Work for a Just Transition” to support German, European and African companies and investors in creating good jobs in Africa and help achieve a just transition towards climate-friendly economies and lifestyles.

The Partnership for Prospects Internal link

At the Syria conference in February 2016, the German government announced that it would launch an employment drive for the Middle East entitled “Partnership for Prospects” so as to support people on the ground through job and income opportunities. Through cash-for-work activities, the programme provides quickly available income opportunities for refugees and for local people from host communities.

Civil Peace Service (CPS) experts work in crisis regions, helping to build a basis for lasting peace. They foster the non-violent resolution of conflicts between host communities and displaced people, provide space for dialogue to reduce prejudice and stereotypes, make the concerns of disadvantaged people heard, and help former combatants to return to civilian life.

The BMZ's work in the field of tackling the root causes of displacement currently focuses on the countries neighbouring Syria, which are reaching the limits of their service provision capacity because they are hosting so many Syrian refugees, and on African countries that are hosting many refugees and internally displaced persons or that are countries of origin of large numbers of displaced people.

Further focuses of Germany's efforts are countries in other regions with high numbers of displaced people, such as Pakistan, Colombia and Ukraine.

The German government's support for refugees, internally displaced persons and host communities is part of an international effort. In this context, Germany works closely with international organisations: the United Nations and its Children's Fund (UNICEF), its World Food Programme (WFP) and its Development Programme (UNDP), the International Labour Organization (ILO), and the International Organization for Migration (IOM). Together with the United Nations Refugee Agency (UNHCR), Germany is working to improve the coordination and integration of humanitarian assistance with long-term development cooperation.

The German government also works together with German civil society organisations. The BMZ supports the work of these organisations through considerable financial contributions, which are increased in times of severe crises.

In order to share responsibility more equitably within the international community, the United Nations adopted the Global Compact on Refugees (External link) in December 2018.

On 17-18 December 2019, the first Global Refugee Forum took place in Geneva. At the Forum, about 800 pledges were made by governments, international organisations, non-governmental organisations and the private sector with a view to implementing the Compact. As an important refugee host country and also an international supporter of refugee protection, Germany played an important role as a co-organiser of the Forum. In future, the Forum will be held every four years, with the second meeting being planned for December 2023 in Geneva. 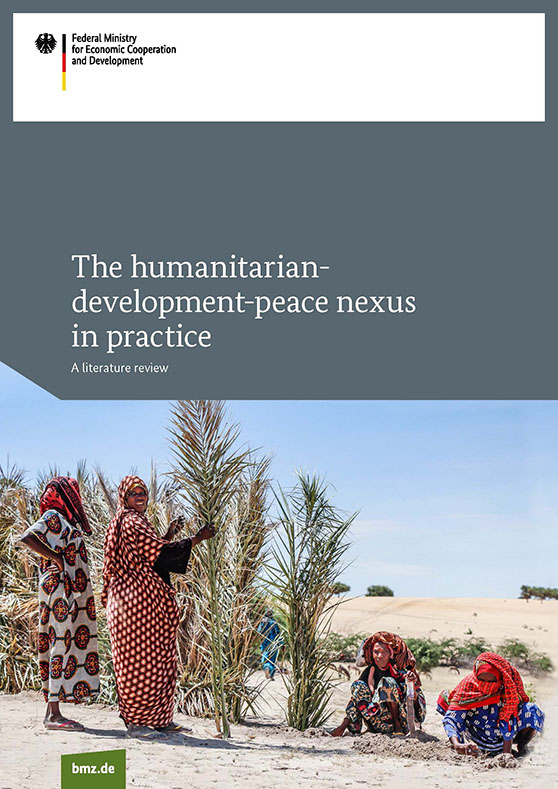 The humanitarian-development-peace nexus in practice 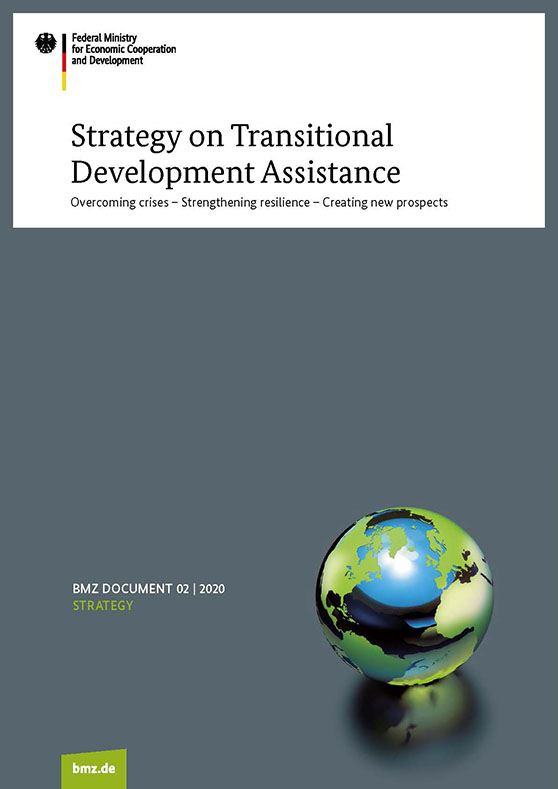