From the Sahel region to Yemen and all the way to Iraq: crises like violent conflicts, natural disasters and epidemics have increased dramatically across the globe. The number of people living in regions that are affected by protracted, complex and recurrent crises is increasing.

Poor population groups in particular are often defenceless in the face of violent conflicts and natural disasters. When their livelihoods are destroyed they are often unable to rebuild them without assistance. In addition, the governments in the affected regions often lack the will or the capacity to protect the people and facilitate reconstruction. The impacts can also spill over into neighbouring countries, for instance when they result in a refugee influx.

In such contexts, the BMZ draws on a quick and flexible instrument for recovery, namely: transitional development assistance. Its purpose is to help strengthen the resilience of people who are particularly hard hit and of local structures in a sustainable way so that they will be able to deal with existing crises themselves and reduce the risk of new crises. Transitional development assistance thus makes an important contribution to crisis prevention.

The new strategy on transitional development assistance, which was published by the BMZ in July 2020, lays out a clear and internationally recognised strategic framework for continuing to respond to the diverse challenges of the multidimensional crises around the world. 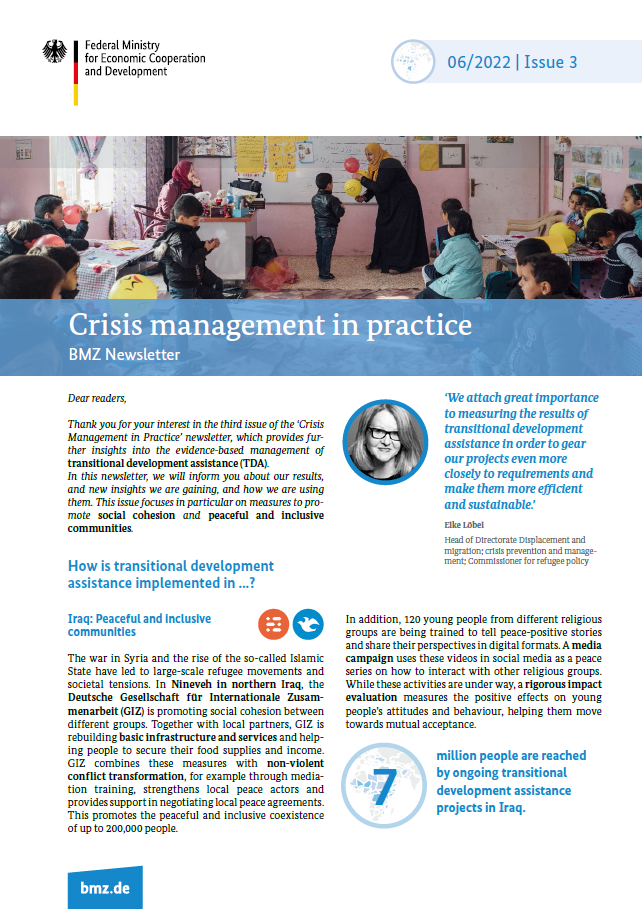 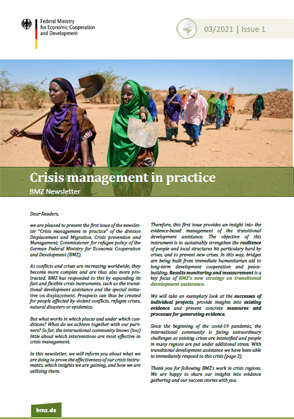 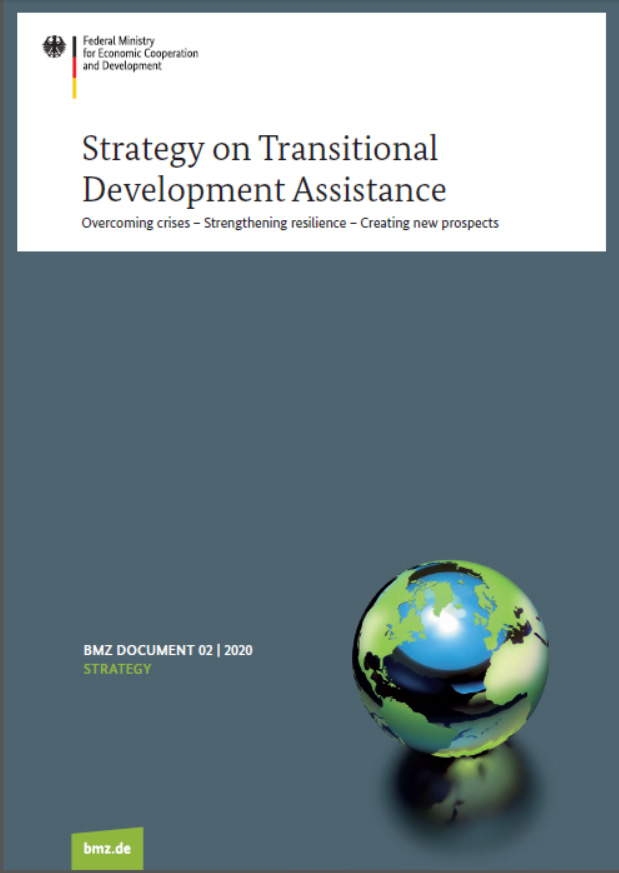 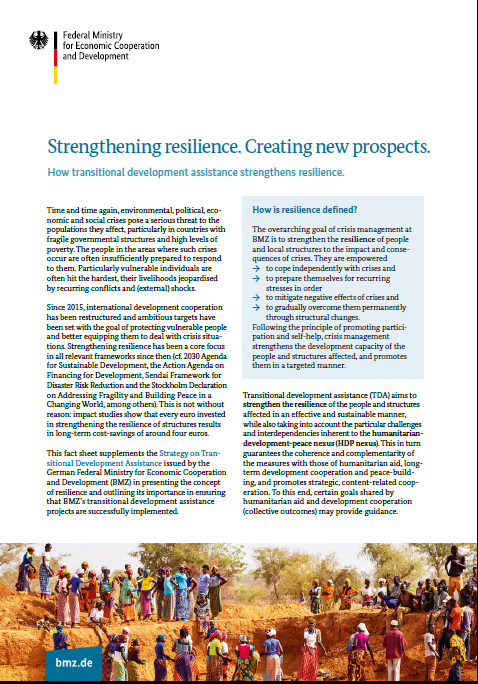 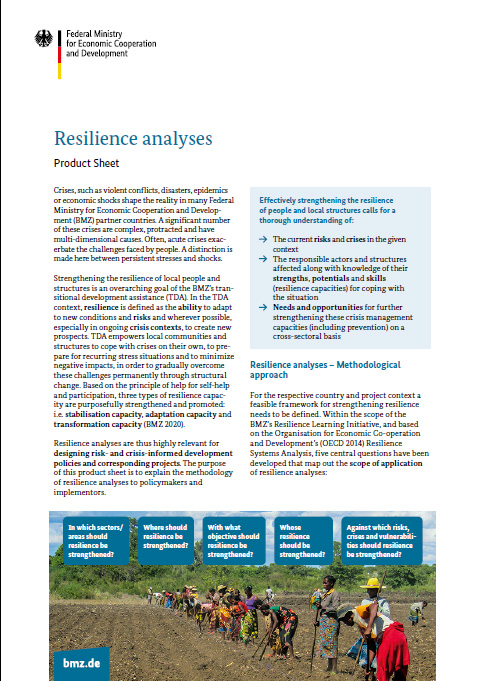 What do we want to achieve? Promoting reconstruction and peaceful coexistence, reducing poverty

The transitional development assistance provided by the BMZ creates links between short-term humanitarian assistance and long-term development cooperation and also makes a contribution to peacebuilding. This close dovetailing ensures that even the very first support measures promote social recovery and peaceful coexistence in a sustainable manner and reduce poverty. It is the only way for people to be able to improve their prospects by their own efforts and not be repeatedly dependent on external help.

Transitional development assistance always builds on existing structures and the knowledge of the people on the ground and is implemented in cooperation with experienced partners. That includes German non-governmental organisations, the Deutsche Gesellschaft für Internationale Zusammenarbeit (GIZ), KfW, the United Nations Children's Fund (UNICEF) and the World Food Programme of the United Nations (WFP).

The BMZ sets out binding rules for its partner organisations, thus creating a framework for their work and ensuring the effectiveness of its transitional development assistance.

Transitional development assistance is rooted in a comprehensive approach that links different areas so as to improve the livelihoods of affected people as effectively as possible. 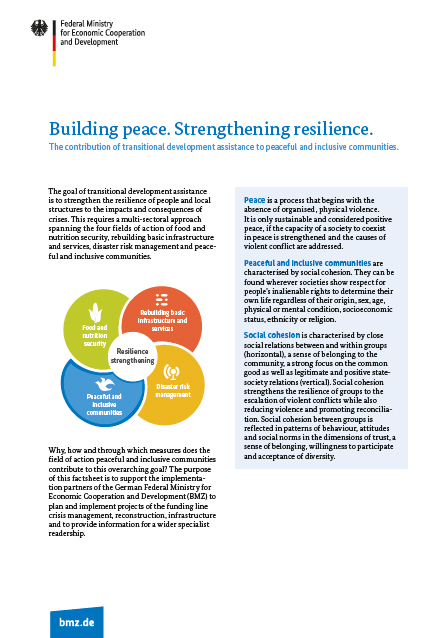 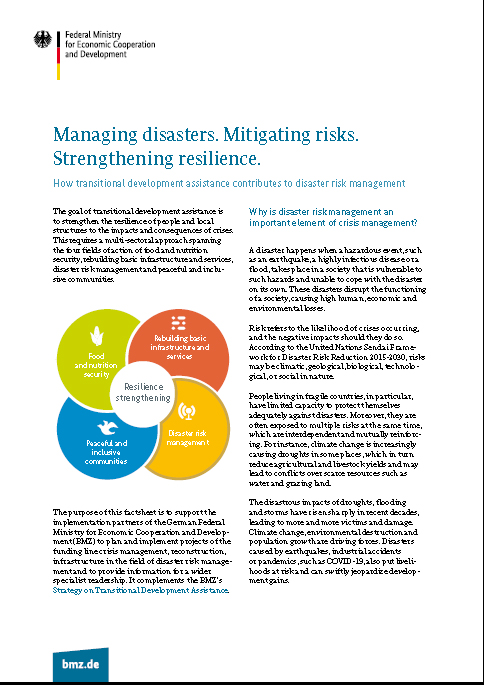 In crisis contexts, the Corona pandemic has sometimes had particularly catastrophic effects and continues to pose an existential threat to the livelihoods of many people.

The BMZ’s transitional development assistance provides rapid and flexible support to reduce the spread of the virus and to mitigate its negative consequences.

The implementing partners of transitional development assistance are adapting their programmes in the four fields of action to the pandemic situation and the respective local contexts.

They are building capacities in the health sector, training specialised personnel, disseminating information through campaigns, securing training and income opportunities, and ensuring access to water, sanitation, and hygiene services. Since the beginning of 2020, partners have also been able to use their funds in particular for this purpose.

Transitional development assistance aims to prevent the negative consequences of the pandemic and enables people to adapt to the situation. The measures support local structures and sustainably strengthen the resilience, in particular of mothers, children, displaced people, host communities and other affected persons.

Transitional development assistance is mainly employed in countries affected by multiple crises and where the state on its own is incapable of supporting the people and communities affected by crises and disasters. It is engaged primarily in countries in the Middle East, East and Central Africa and the Sahel region.

Factsheets on the regional engagement 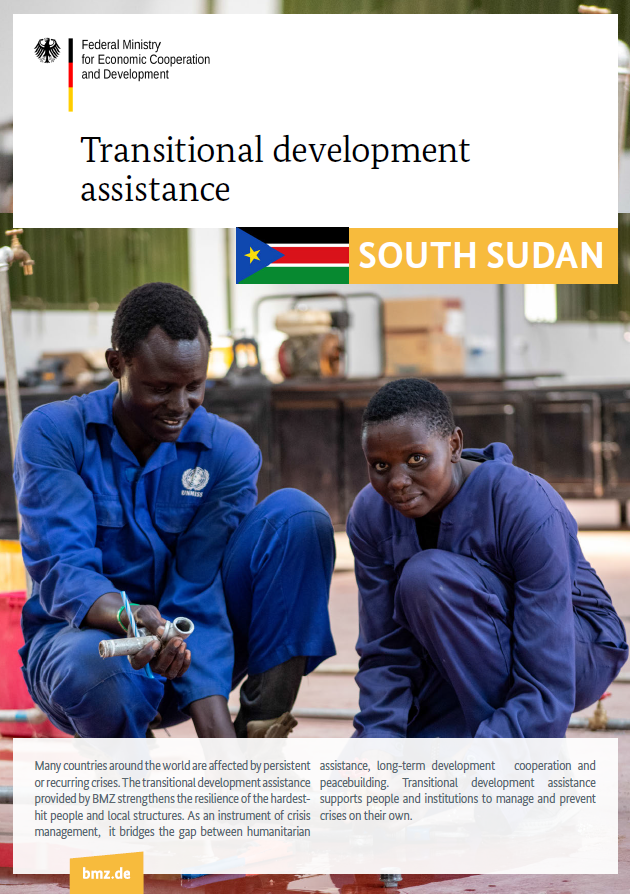 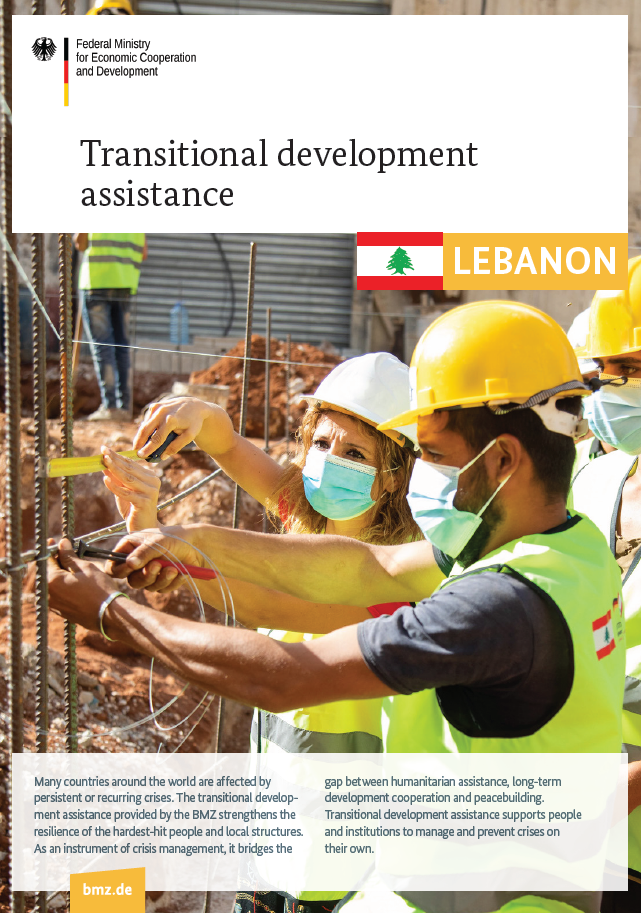 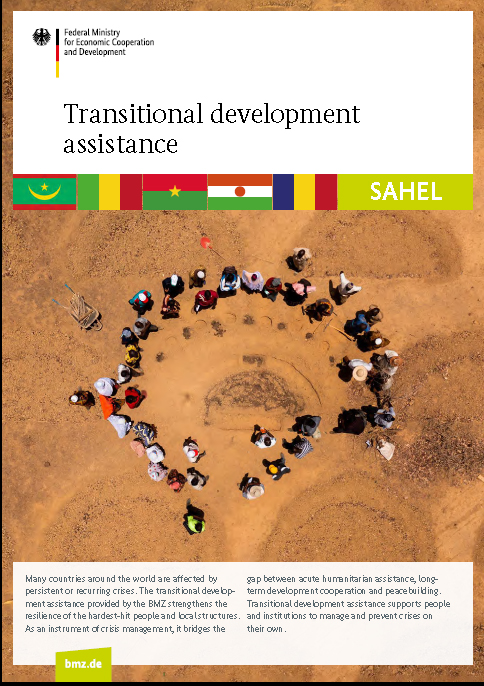 Transitional development assistance in the Sahel 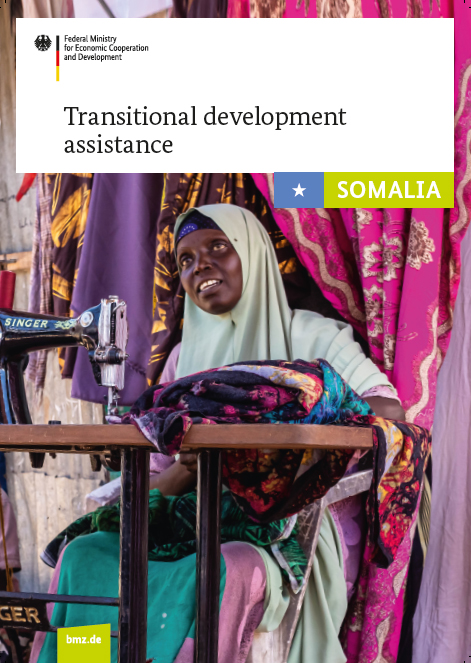 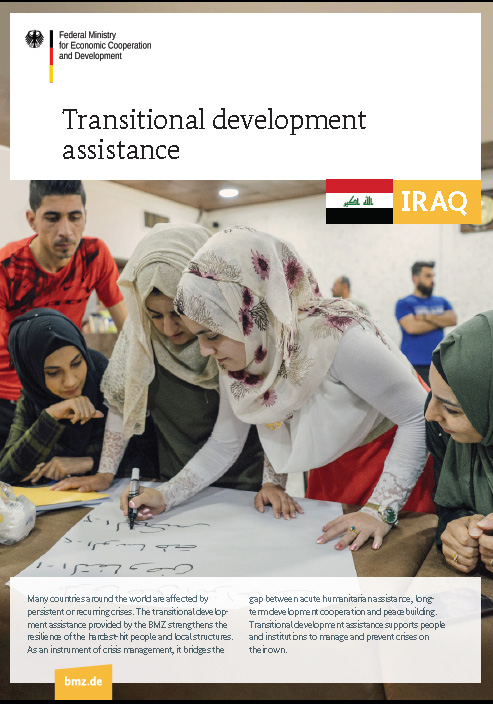 Together with the World Food Programme of the United Nations (WFP), the BMZ developed the initiative for resilience in the Sahel to bring about sustainable improvements in the food and income situations of people in Burkina Faso, Chad, Niger, Mali, and Mauritania.

The support ranges from providing school meals to rehabilitating agricultural land. People work for cash on a temporary basis. The influx of cash strengthens local markets. So far, 1.4 million people have benefited from these measures.

Recently, the United Nations Children's Fund (UNICEF) has also begun supporting children and young people in the Sahel in cooperation with WFP, working in the areas of education, food security, improving water and sanitation, and child protection. By 2022, a total of 3 million people will have been reached in Niger, Mali and Mauritania, 1.9 million of them are children.

Attacks by the Boko Haram militia, weak state institutions and intensifying conflicts over natural resources are leading to hunger, insecurity, and displacement in Diffa in Niger. Social ties within families, between generations and ethnic groups have been severely strained or torn apart by violence, extreme poverty, and human rights violations.

The World Food Programme supports communities in improving their access to land and water resources, for example through restoring cultivable land and irrigation systems. Meanwhile, UNICEF supports communities in health care, family planning and nutrition for their children, for example by distributing nutritious food. Girls additionally benefit from cash transfers which provide for their basic needs. This enables them to go to school instead of working at home to support their families. In the joint programmes, the population groups help plan services in their community. The programme supports young people to engage in intergenerational dialogues that promote peace.

The Syria crisis and the expansion of the so-called Islamic State led to a massive influx of refugees into northern Iraq. More than 1.4 million internally displaced persons and some 235,000 refugees from Syria are pushing the infrastructure of host communities to its limits, making it impossible for everyone to be provided for at the same time. Thanks to transitional development assistance both the refugees and local communities now have improved access to safe water, basic medical services and psychosocial counselling. More than seven million people are benefiting from these measures. Support is also being provided to returnees to help them develop new prospects in destroyed areas that have been liberated from the so-called Islamic State. Schools and hospitals, for instance, are being rebuilt and support is being provided to revive agricultural production.

The comprehensive approach of transitional development assistance also includes measures to reduce the risk of conflict between local people and refugees. The measures contribute as well to promoting peaceful communities and dialogue between all the religious and ethnic groups in the region. This approach follows the recommendations of the World Bank's Building for Peace report.

The examples show that the BMZ's transitional development assistance focuses not on the weaknesses but on the strengths of people and institutions. It safeguards livelihoods, creates opportunities, and promotes peaceful and inclusive coexistence.