Press release 19 May 2022 | Berlin – The G7 Development Ministers agreed today to launch a Global Alliance for Food Security as a way to combat the hunger crisis that is threatening the world. Federal Development Minister Svenja Schulze had proposed such an alliance at the Spring Meeting of the World Bank and had received support for her proposal from World Bank President Malpass. Following this G7 decision, the aim now is to recruit other partners for the alliance in order to deliver a swift, effective and sustainable joint response to the food crisis triggered by Russia’s war of aggression.

Development Minister Schulze said: “Russia’s war of aggression against Ukraine has dramatically exacerbated the global food situation. The worst famine since the Second World War is threatening. Because of that we need to take determined and concerted action and ensure that grain supplies quickly reach the people facing famine. However, we also want to ensure that structures are permanently altered in such a way that developing countries are more able in future to be self-sufficient, instead of being dependent on the global market. The Global Alliance for Food Security that I have proposed together with the World Bank President David Malpass now has the support of the G7. But that is just the start. The Alliance is open to all who want to work with us on developing solutions. The involvement of the World Bank will help us achieve a sustained impact with this Alliance.”

In addition to the World Bank, the G7 and the EU Commission, the Alliance is already supported by the UN Global Crisis Response Group, Norway, Denmark, the African Union, the UN World Food Programme (WFP) and the International Fund for Agricultural Development (IFAD). The Alliance is also open to the private sector and to civil society organisations.

As part of their efforts to combat climate change, the G7 countries agreed to conclude more Just Energy Transition Partnerships with developing countries. The G7 also reaffirmed their intention of entering into country partnerships in order to mobilise public and private funds for sustainable and climate-resilient infrastructure.

For the first time in a G7 communiqué, they also made a commitment to increase their activities in the context of climate-related damage and loss. For example, one aspect here is severe weather event disasters in developing countries as a result of climate change. The joint G7 goal is to set up a shield against climate risks to provide protection before a crisis even arises – for example, via insurance or social protection systems.

Minister Schulze said: “Climate-related damage has been a controversial topic of discussion between industrialised and developing countries for a long time. We want to take on a mediating role here and develop concrete solutions for this problem. I am confident that this concept will help with building bridges at the next climate conference in Egypt.”

For the first time, the concept of a feminist development policy has been included in a G7 communiqué. The G7 development ministers want to break up structures and role models that cement gender inequality. Girls and women are especially hard hit by the impacts of crises and empowering them is a key for good development. Minister Schulze said: “Countries with strong women and girls are stronger societies that are better equipped to meet global challenges.”

Another topic on the agenda was the debt burden on developing countries and emerging economies. The G7 emphasised that progress would need to be made on the G20 Common Framework so that both public and private creditors are included. This topic will also be on the agenda of the G7 Finance Ministers’ Meeting in Bonn.

Final communiqués of the meeting of the G7 development ministers 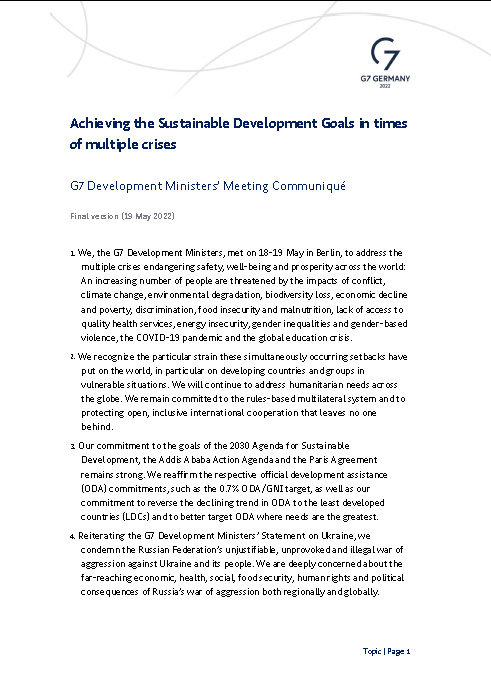 Achieving the Sustainable Development Goals in times of multiple crises 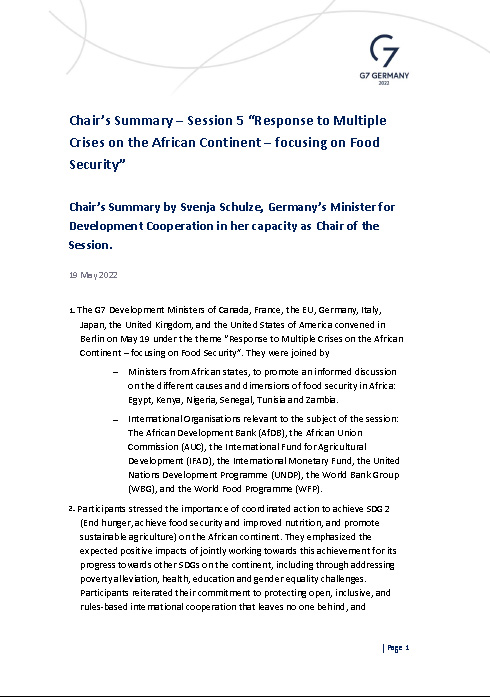 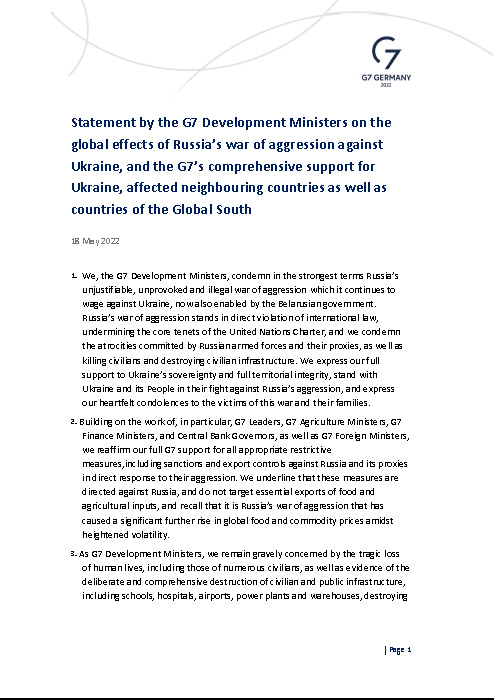 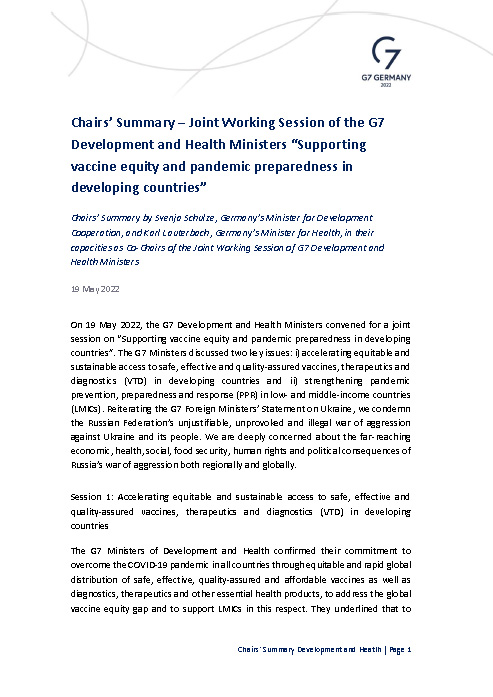