Biodiversity loss is considered the second global crisis, alongside climate change, because the future of humankind hinges on global biological diversity. We need ecosystems and their numerous species of plants and animals for our food security and health, for safe drinking water, fertile soils, clean air to breathe, protection of the global climate, and generally as a basis for economic activity.

However, many ecosystems are no longer intact, and as a result, millions of plant and animal species are at risk of extinction. We can only achieve sustainable development if we stop biodiversity loss – and if we combine our related efforts with climate action.

Every year, ten million hectares of forest is lost, forest which regulates our climate. This is an area the size of a soccer field every four seconds.

About one million hectares of mangroves were destroyed between 1990 and 2020. (In the last decade, the rate was still about 21,200 hectares per year.)

50 per cent of all coral reefs have already been lost. It is expected that by 2050 only ten per cent will remain. In many places, coastal protection can no longer be ensured.

Every day, up to 150 plant and animal species disappear from the Earth. The rate of biodiversity loss is 100 times faster than it would be without human influence. Our ecosystems, which provide clean water, fertile soils, food security, medical treatment and building materials for us, are no longer in balance.

The destruction of ecosystems and the loss of biodiversity are hitting people in developing countries and emerging economies particularly hard. 80 per cent of the world's biological diversity can be found in tropical regions. In order to deliver on the aspiration to fulfil all people's right to a life in dignity, Germany is investing in the conservation of biodiversity worldwide, at a financial level that is almost unparalleled among industrialised nations.

are provided each year by the BMZ in support of the conservation and sustainable use of forests, oceans and wetlands.

are provided each year by the BMZ in support of the conservation and sustainable use of forests, oceans and wetlands.

To help conserve biodiversity in our partner countries, we support fair, sustainable, deforestation-free

To help conserve biodiversity in our partner countries, we support fair, sustainable, deforestation-free

We support the maintenance and development of over

an area six times the size of Germany.

We support the maintenance and development of over

an area six times the size of Germany.

We lobby for developing countries to receive fair compensation for the use of their natural assets.

We lobby for developing countries to receive fair compensation for the use of their natural assets.

We have provided more than

We have provided more than

The BMZ has been working in the international arena to encourage all countries to increase their efforts for biodiversity conservation. Together with the other 195 parties to the UN Convention on Biological Diversity (CBD), the German government is currently involved in drafting a new framework for the Convention's implementation over the next ten years. It is to be adopted – and to usher in a breakthrough – at COP-15, which is expected to be held in China in the second half of 2022.

In the negotiations, Germany has been advocating, among other things, for

Further information can be found here.

We can only achieve biodiversity conservation and sustainability if we take account of the value of natural assets and if we systematically mainstream this in all activities pursued by governments and by enterprises.

Three quarters of all regions with particularly rich biodiversity and important ecosystem services are located in the Global South. Many developing countries and emerging economies need assistance in order to conserve their biological diversity. There is a need for innovative financing instruments and for capacity development.

Fair production and sustainable consumption are vital to the conservation of biological diversity in areas that are used for farming or forestry purposes. Sustainability facilitates intergenerational equity.

Protected areas such as national parks, landscape protection areas, biosphere reserves and World Heritage sites facilitate the conservation of ecosystems and their services for people and provide a refuge for endangered species.

The world's oceans are a key component of the global ecosystem. They play a major role for climate regulation and are home to vast biodiversity. Without them, life on Earth would not be possible in its present form.

Joint efforts to fight poaching, illegal fishing, illegal logging and trade in wildlife and wildlife products are a key prerequisite for the conservation of habitats and endangered species.

Human health depends on diverse, thriving ecosystems and their services. And biological diversity is also crucial for preventing and fighting diseases and pandemics.

Destroyed and degraded ecosystems need to be restored. This is our only chance to regulate our climate, continue to have access to clean water, and maintain soil fertility.

We all can help to conserve biodiversity 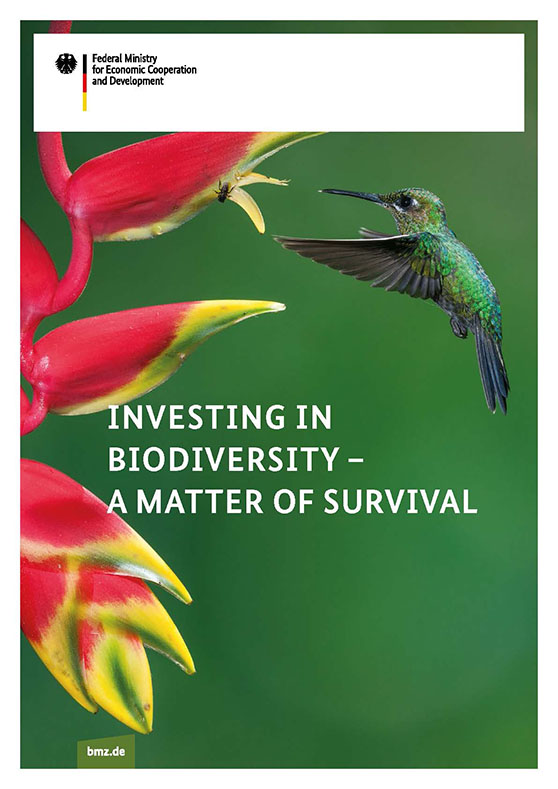 Investing in biodiversity - A matter of survival 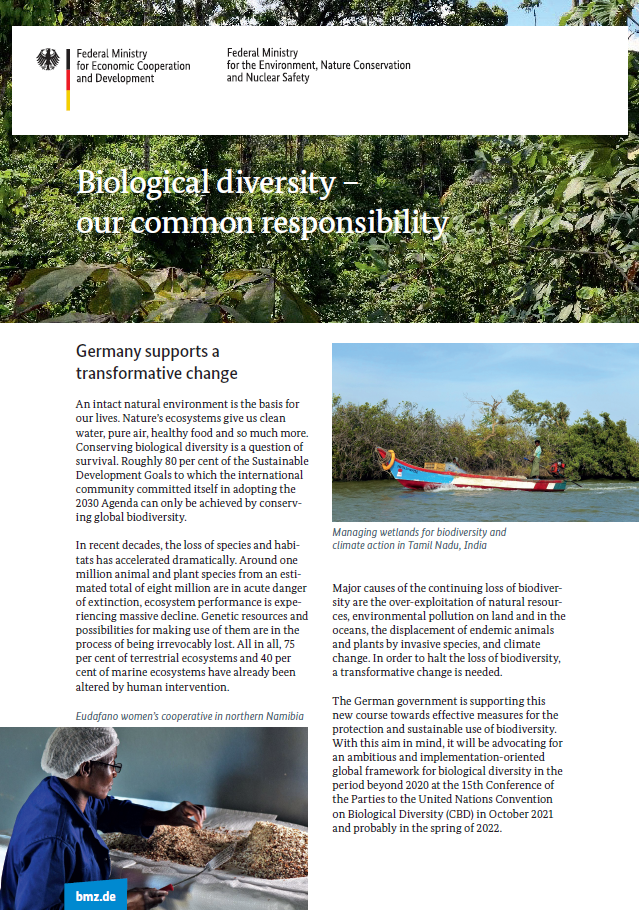